We’ve just made it personal with our collection of birthstone necklaces available in 100% recycled sterling silver and 18ct gold plate with ethically sourced gemstones. Jewellery you’ll love to give and get in return. 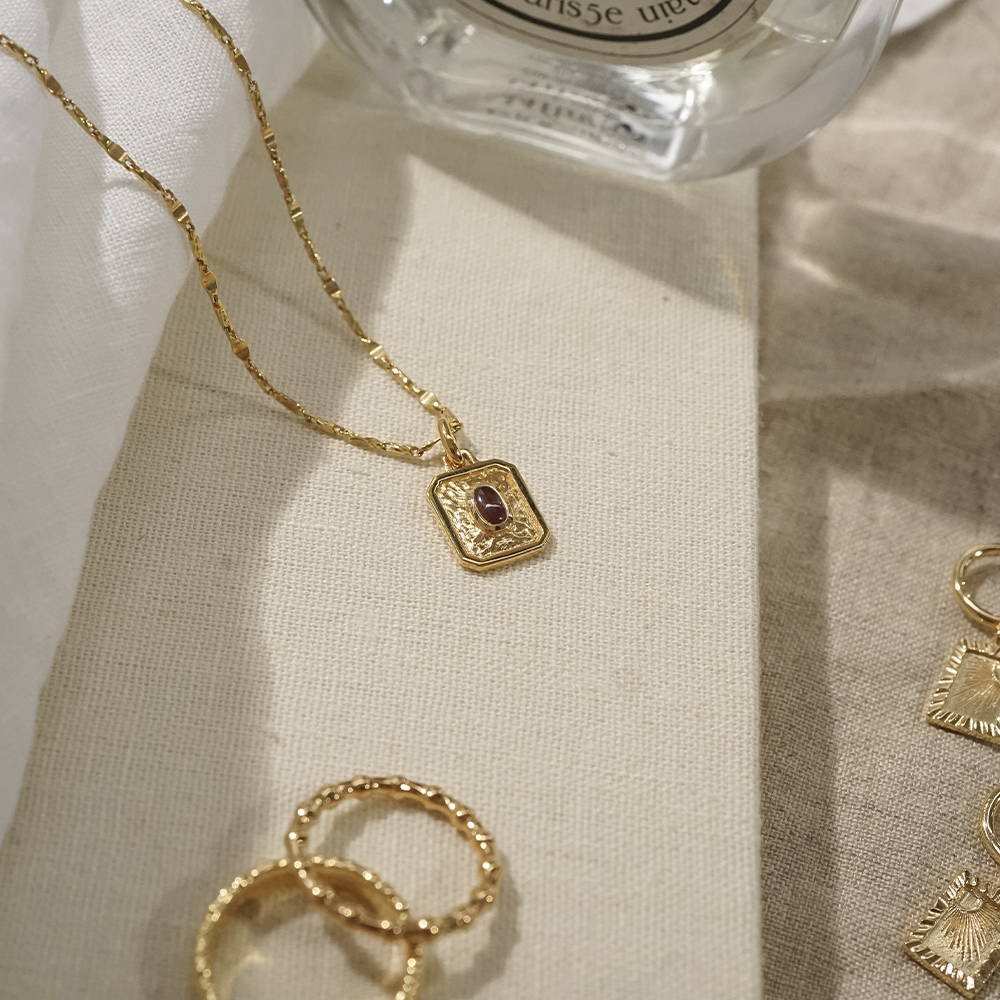 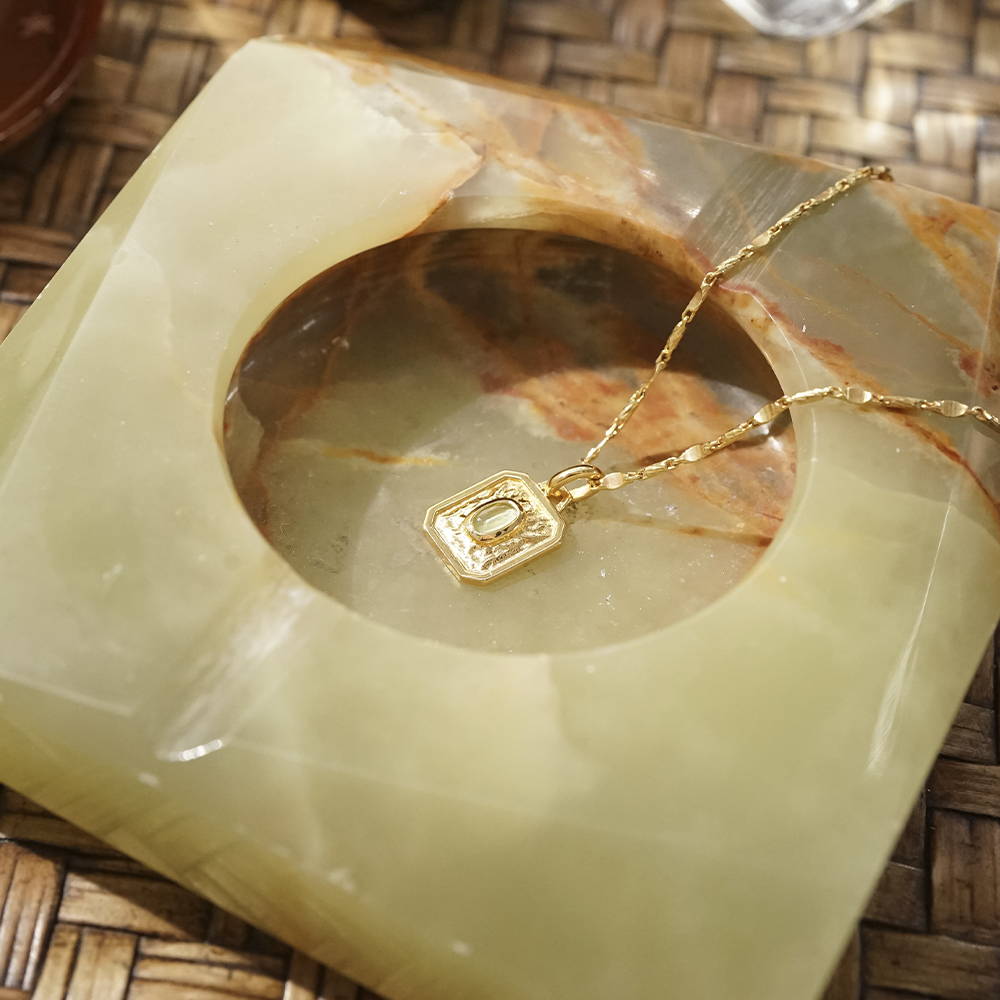 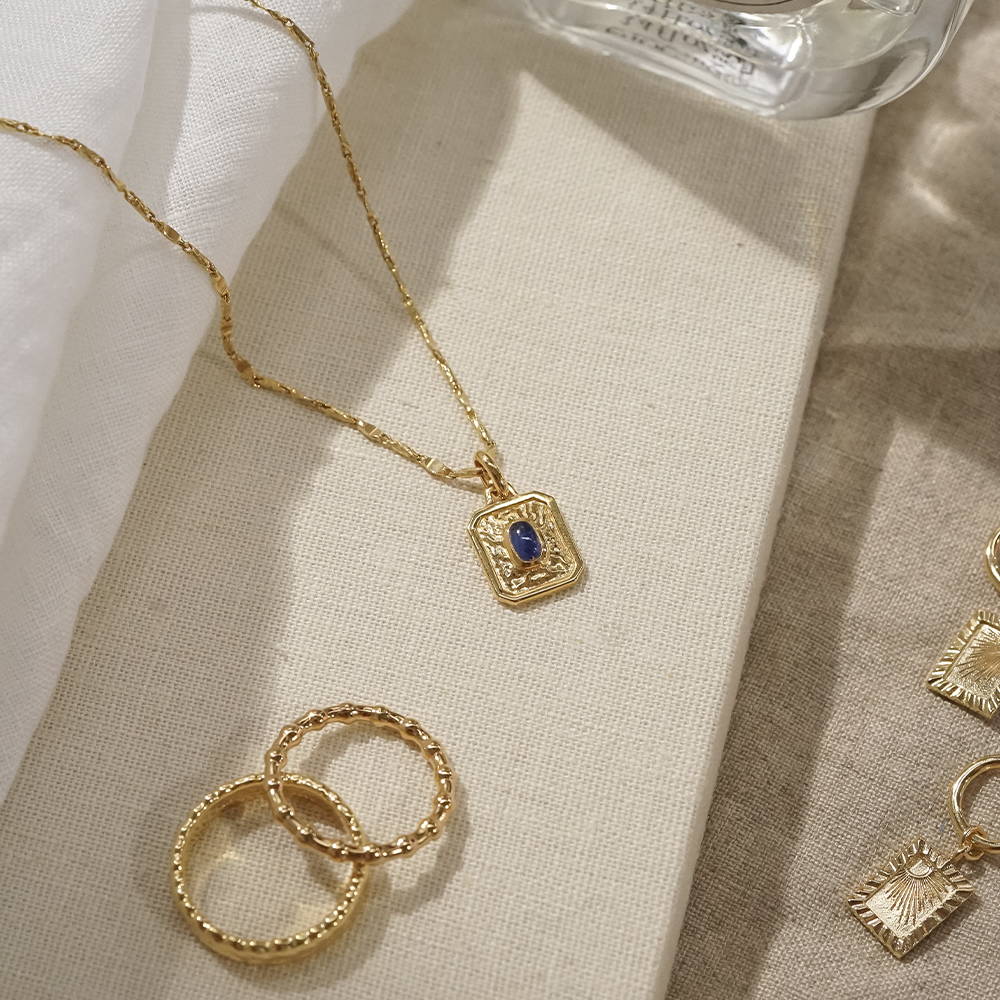 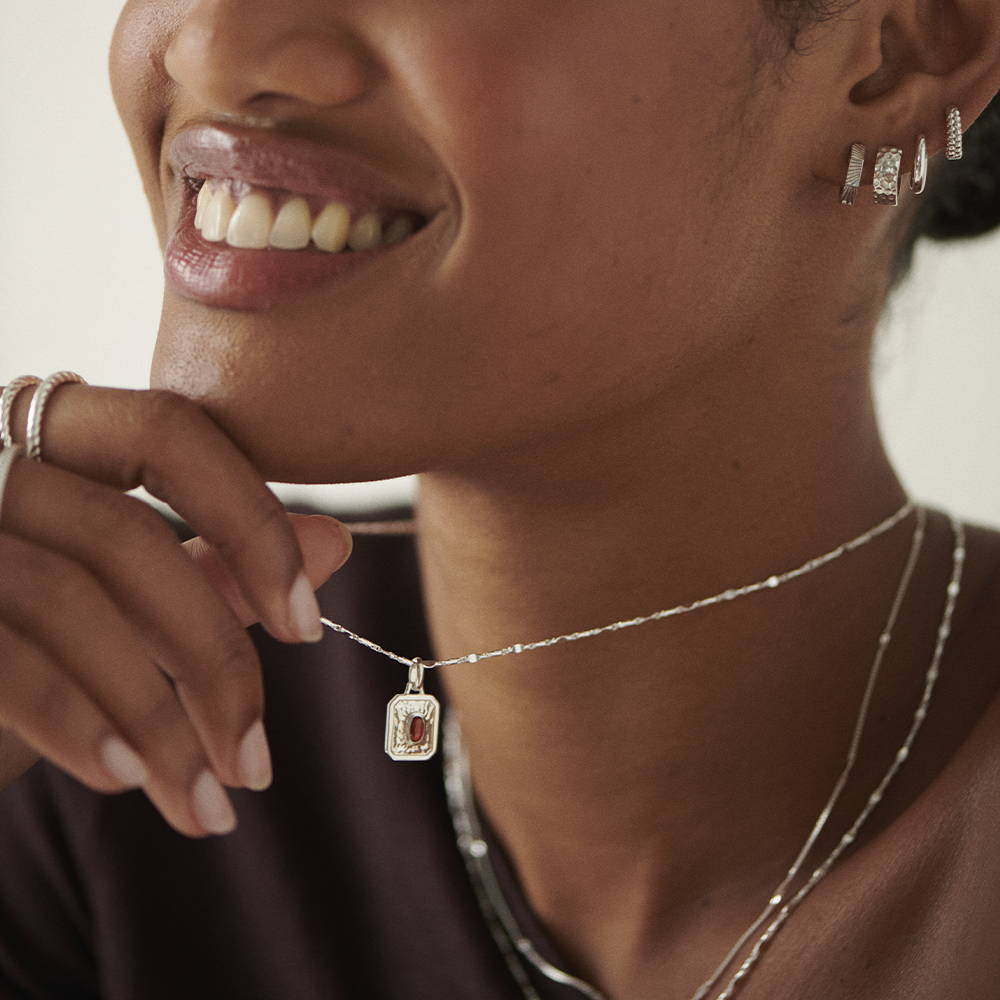 The birthstone for those born in January, garnet historically has been associated with the heart, blood and fire - making it a true symbol of passion. Its rich dark red tone reflects its properties of inner strength and courage.

Amethyst, February’s birthstone, is a miracle aid for those trying to bring about a bit of balance. It harnesses healing properties to help strengthen relationships and form new meaningful connections. For those struggling with spirituality, amethyst can help by improving mental and emotional well-being. 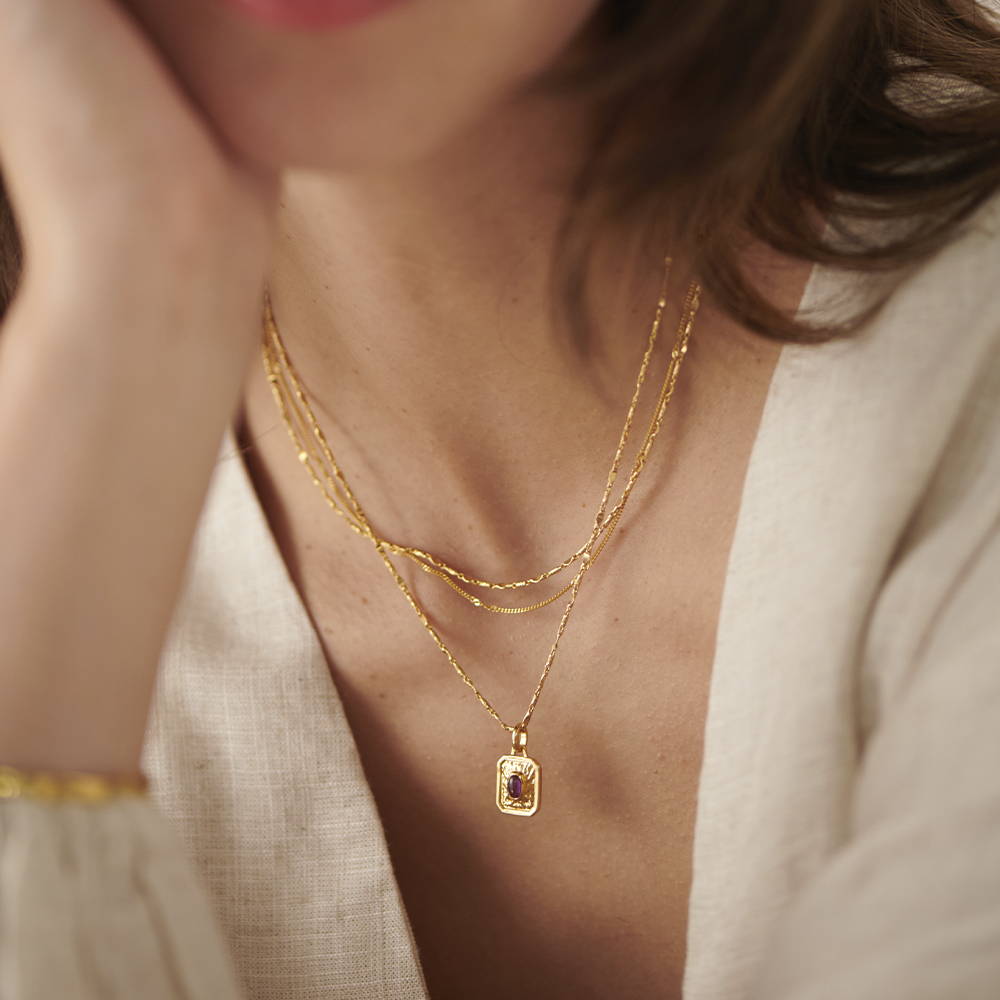 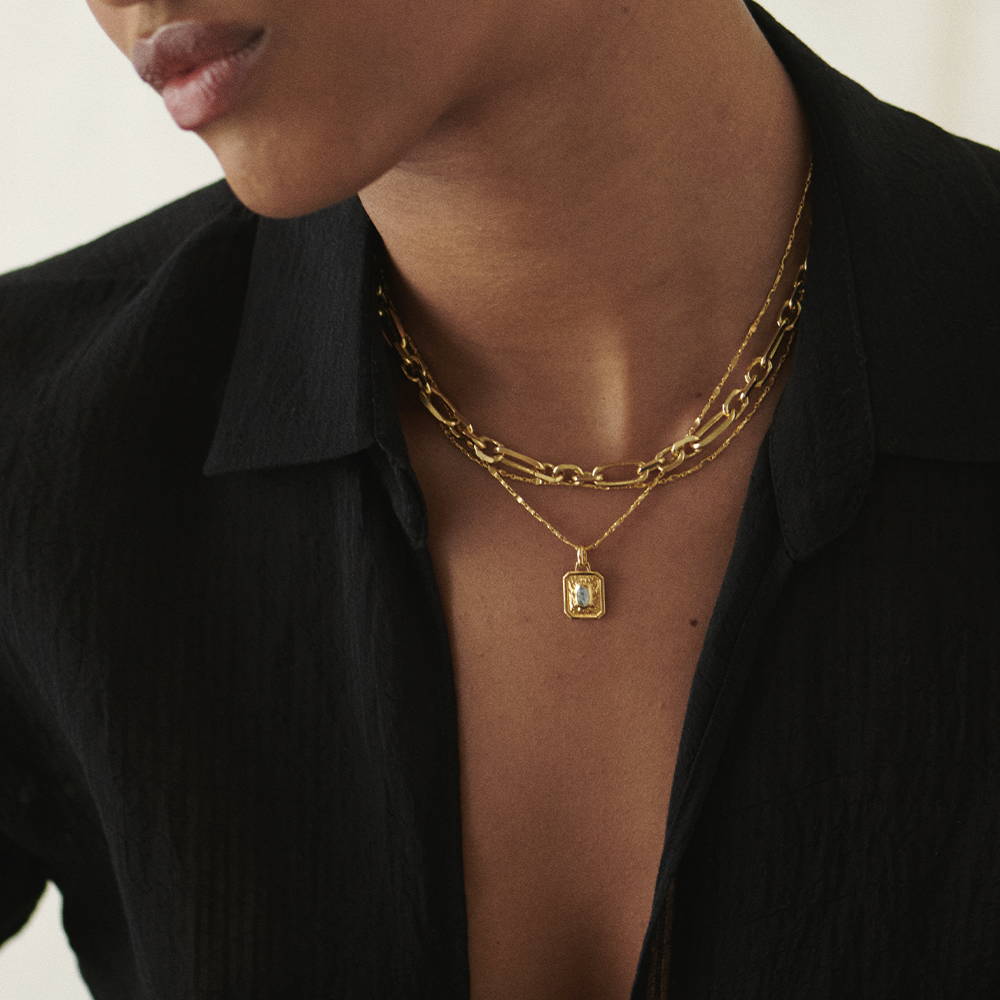 Once used as a protective stone by those at sea, aquamarine is known as a symbol of courage and tranquillity. Its grounding properties can be beneficial for those seeking clarity in their lives, whether that be social, relationship or work-related. A beautiful vibrant stone, this is especially powerful for March babies as their official birthstone.

White topaz, commonly known to be April’s birthstone, is symbolic of empowerment and clarity above all. This naturally sparkly stone is known to enhance individuality by making the wearer embrace their most authentic self. It is also commonly used as an aid for manifestation as it can help the wearer find the most realistic and intuitive way to approach challenges. 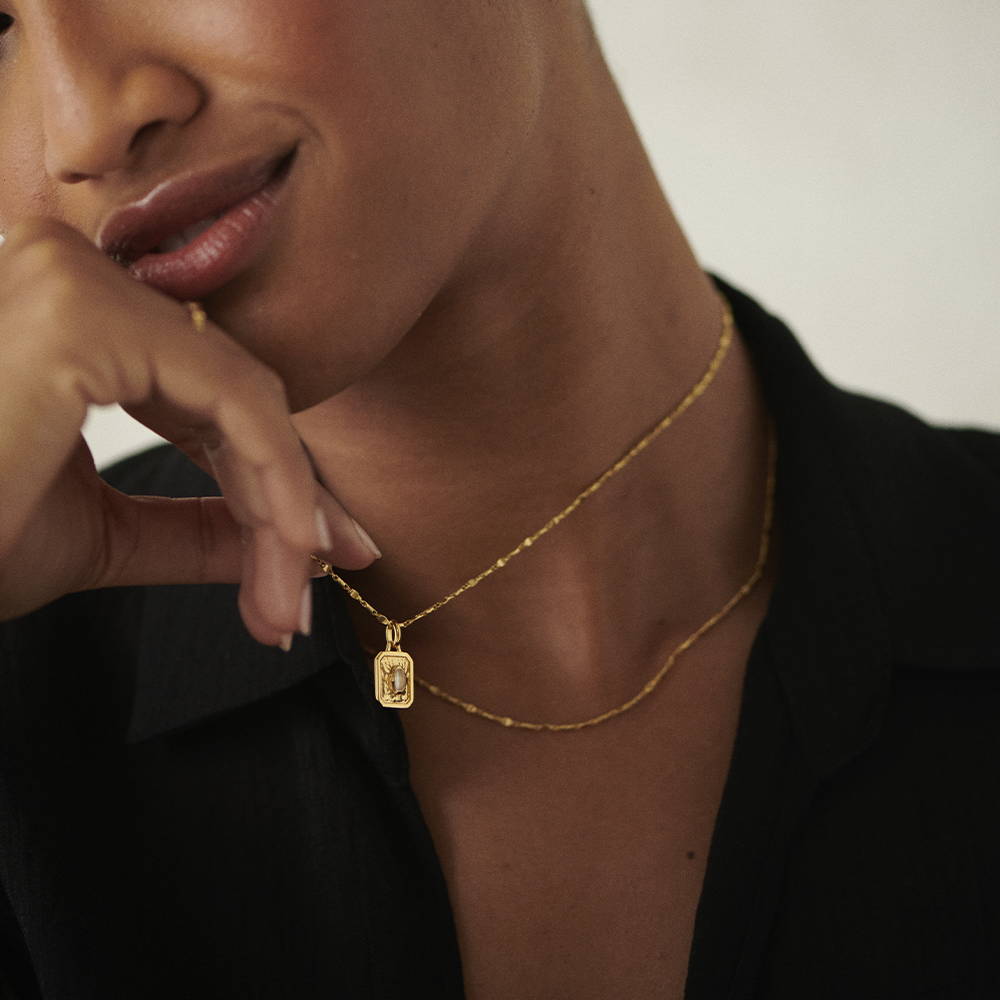 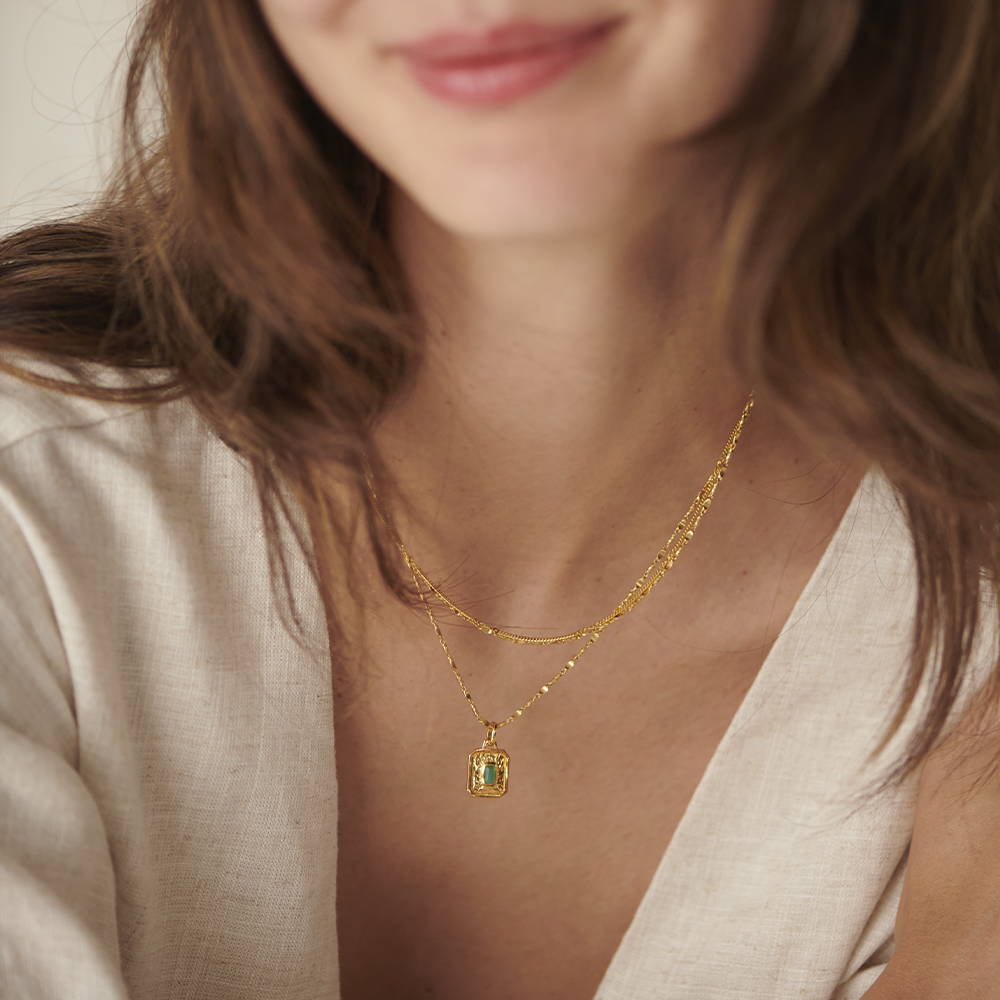 Emerald has always been seen as a symbol of true love. In ancient Greece and Rome, it was thought that Venus, the Goddess of Love, would even wear the bright-green stone as a ring. Connected too to the heart chakra, it helps to invite meaningful relationships and make intuitive decisions.

This iridescent, milky-white stone was named after its resemblance to the moon’s surface. Having been used and celebrated for millennia, it is associated with many different properties - though, most of all, it is known for bringing good fortune. For those born in June, it represents new beginnings and abundance. Historically, it was also thought to enhance clairvoyance due to its innate connection to the moon. 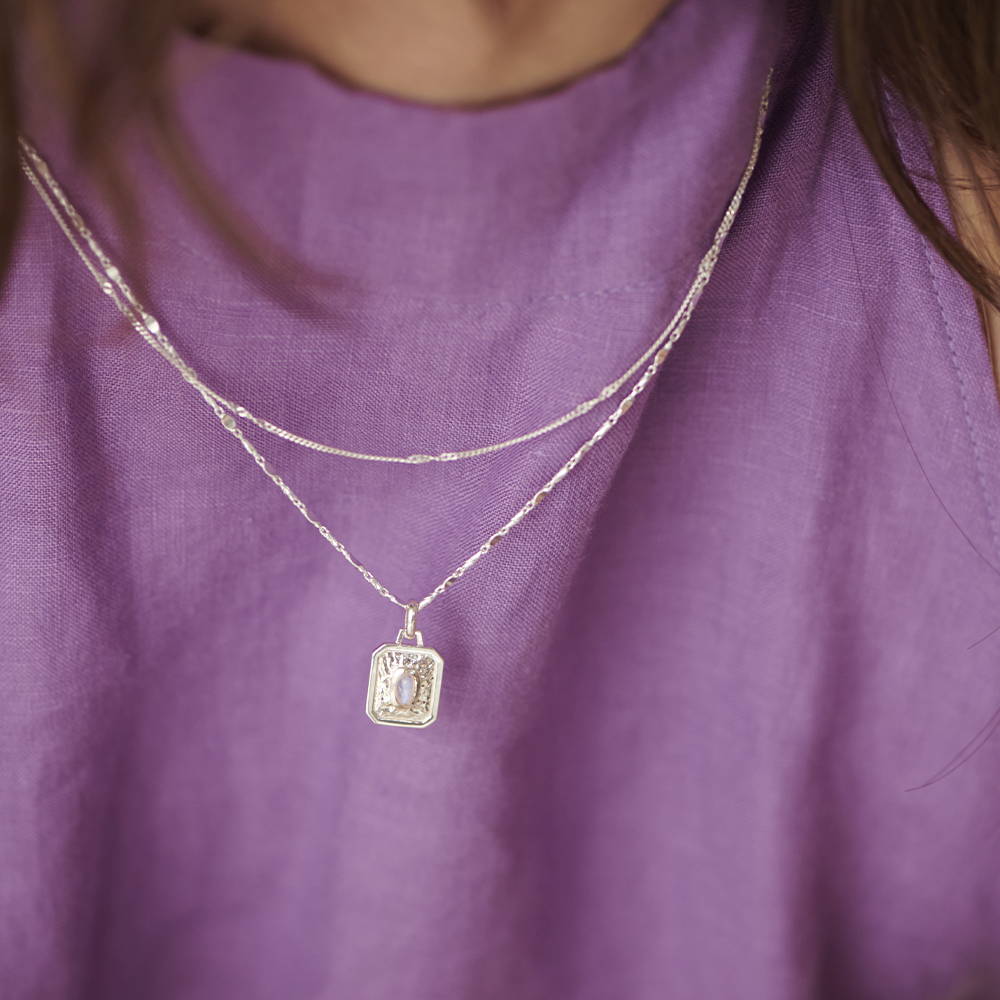 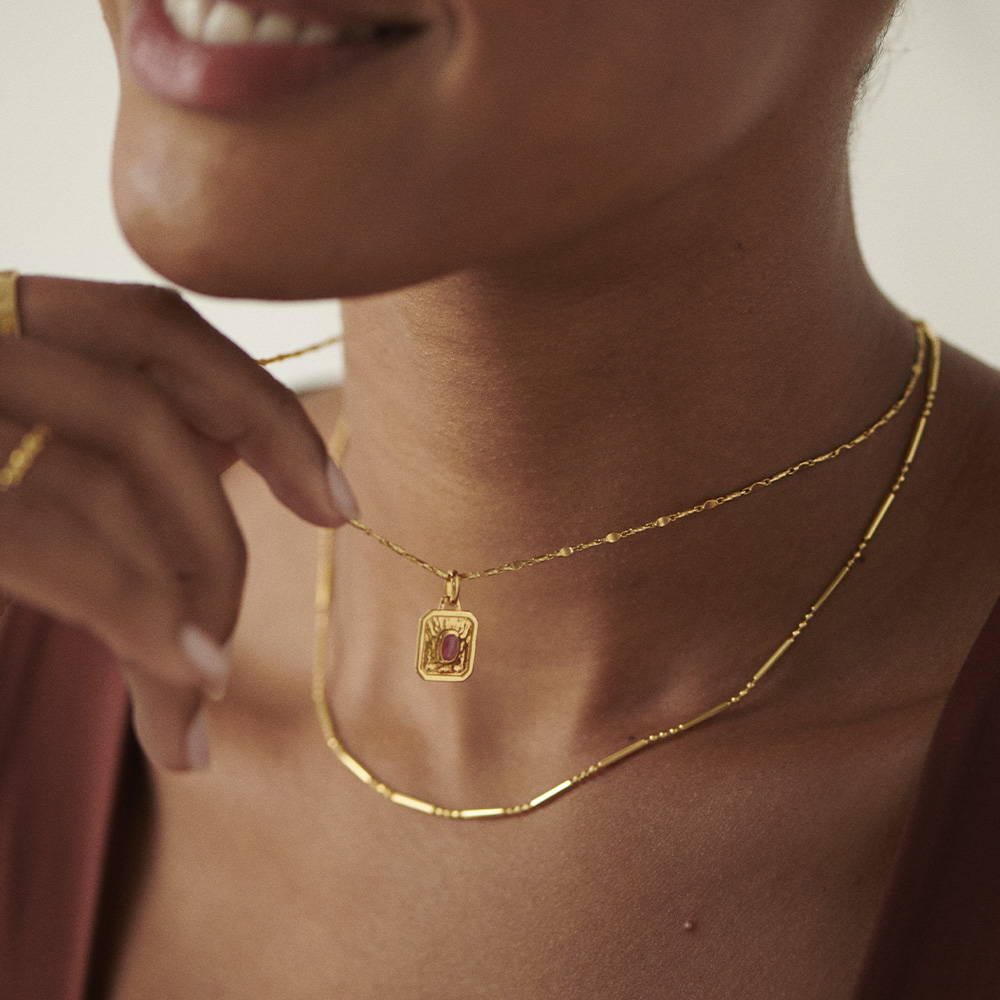 July’s birthstone, the ruby, encourages passion and encourages the wearer to live a little more dangerously. It is an effective stone for removing negative energies, allowing the wearer to welcome new love and joy into their life.

Fortune favours the brave - and those who wear peridot. This sea-blue stone is thought to bring good luck and prosperity to its wearer. Known as the August birthstone, peridot instils the wearer with a refreshing sense of confidence - pushing them to strive for higher goals. 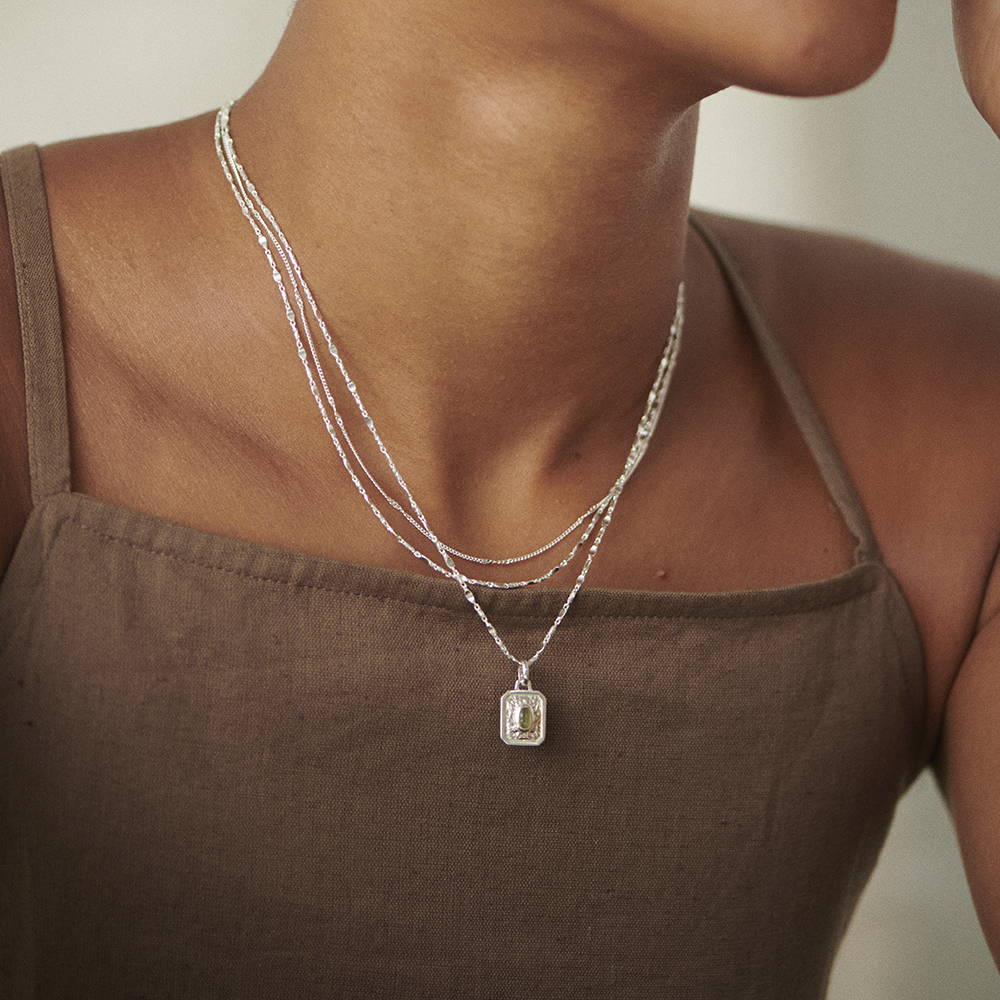 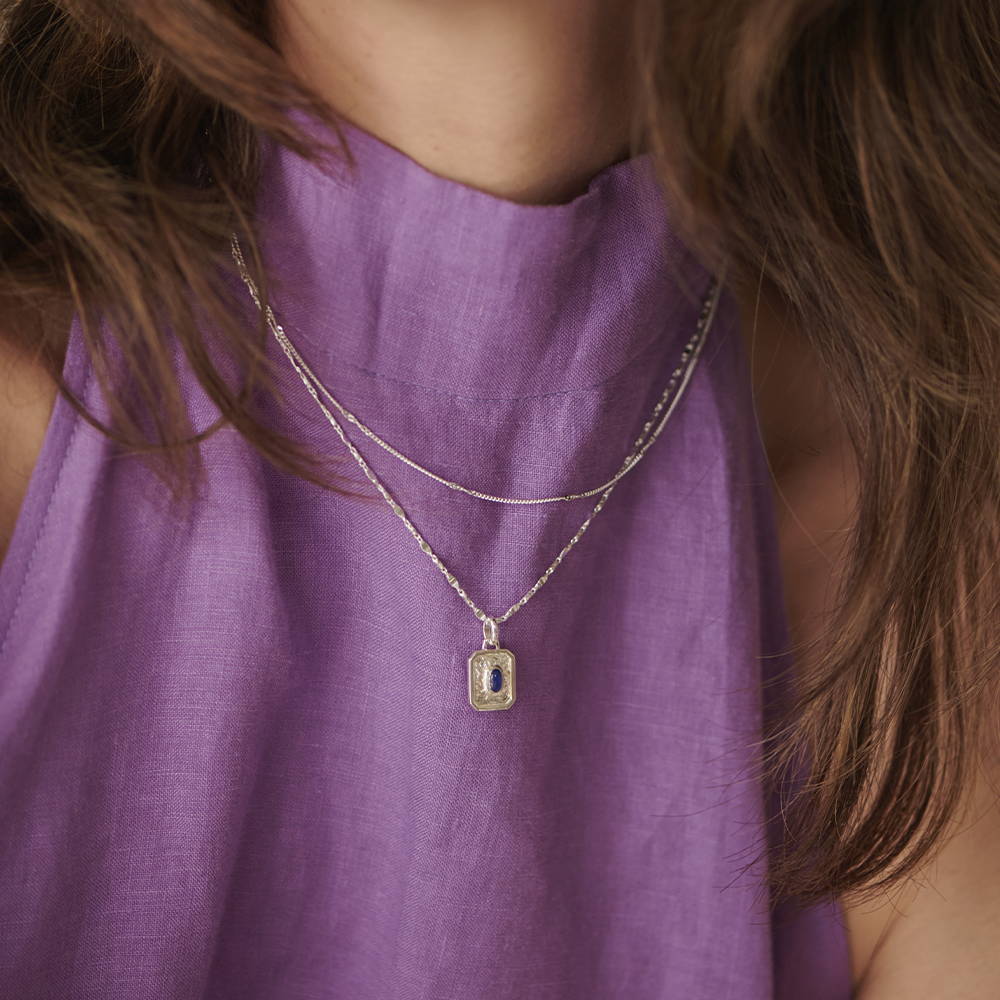 It's your lucky day every day with blue sapphire, a stone that invites good luck into your life. Known also to enhance self-expression in the wearer, September’s birthstone works wonders for those struggling with self-confidence.

Referred to as the 'cupid stone’ by the Romans, the opal represents love and hope in their purest forms. Its iridescent appearance makes it a beautiful stone to wear, but its properties run much deeper. Imbuing the wearer with originality, this October birthstone is ideal for those wanting to enhance their confidence and self-worth. 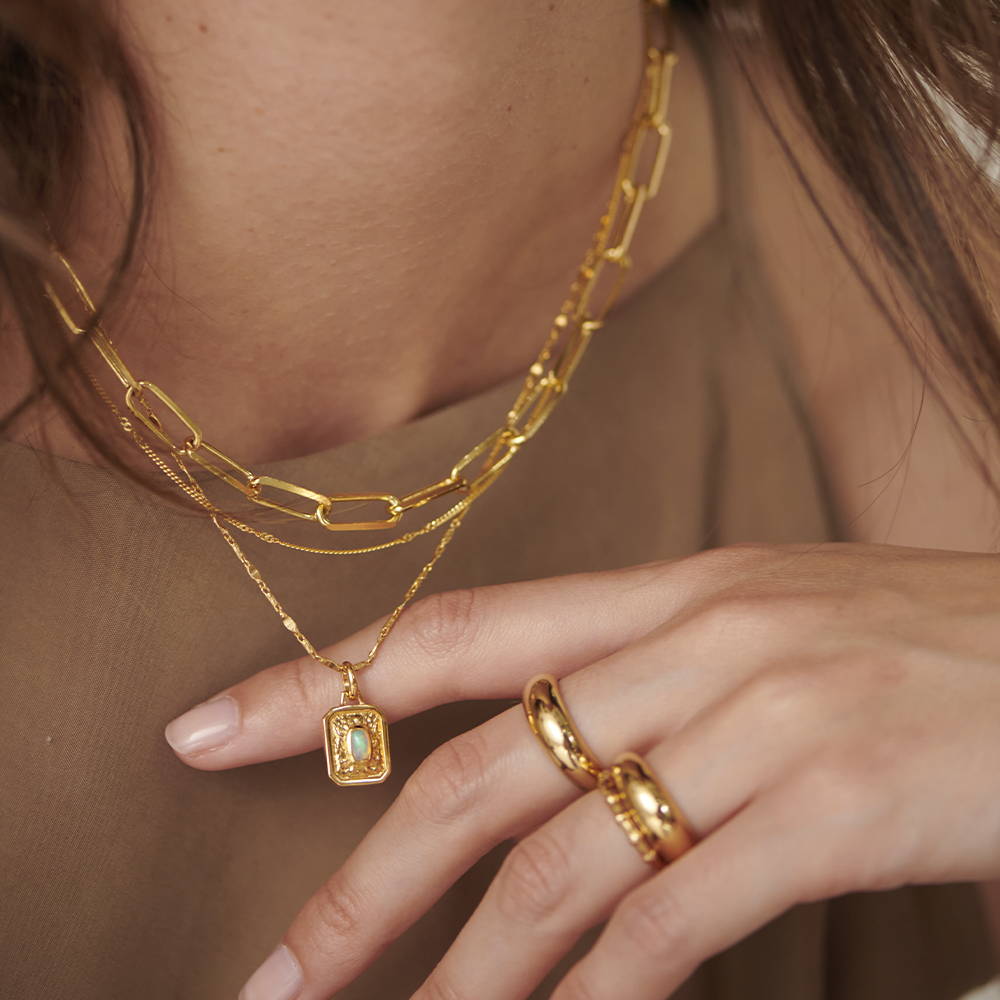 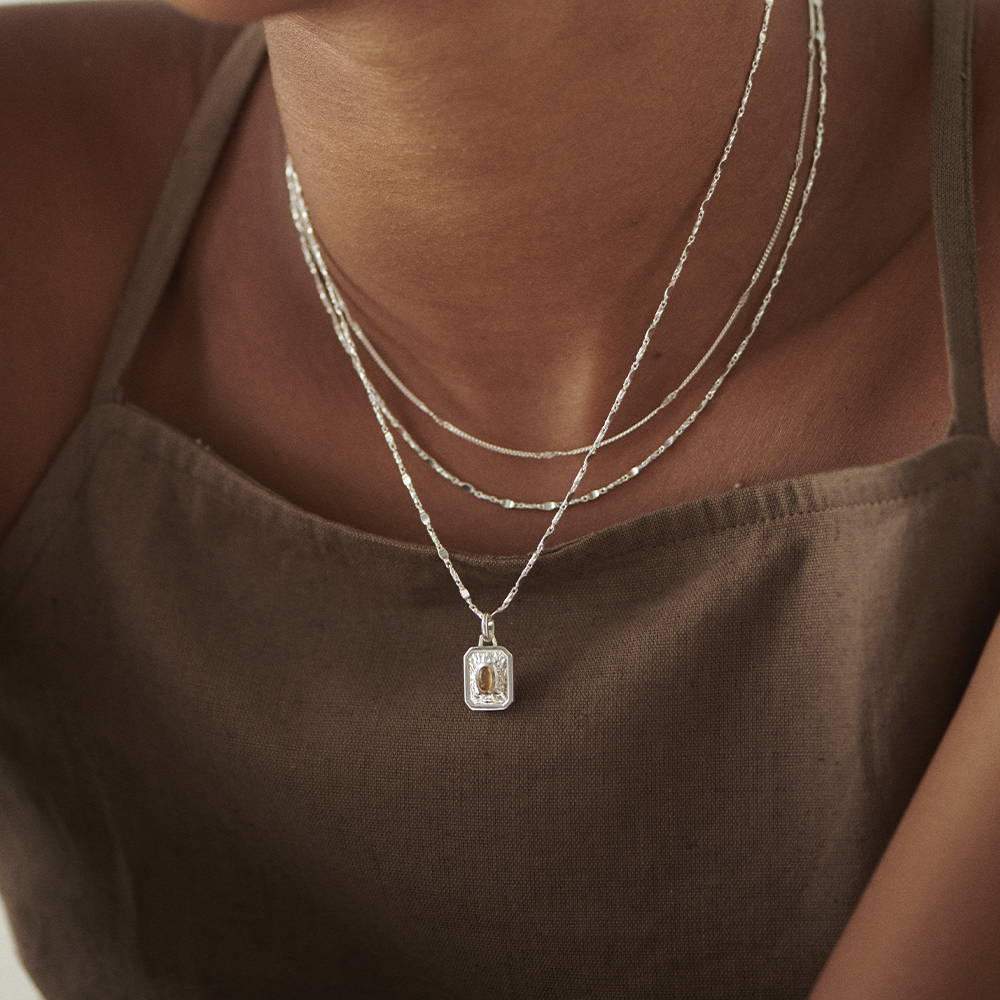 Don't worry, be happy - or so this honey-coloured stone will tell you. Citrine is known to welcome in happiness and enthuse the wearer with new and vibrant energy. For those born in November, this stone encourages abundance of whatever they may be searching for.

For peace of mind, invest in blue topaz. This stunning blue stone is the birthstone for December babies and holds the key to honest communication. It can help to focus the mind, providing the wearer with the confidence needed to take action and make more meaningful decisions. Wisdom is one of the most important properties of blue topaz, hence it is also believed to help the wearer accept personal truths. 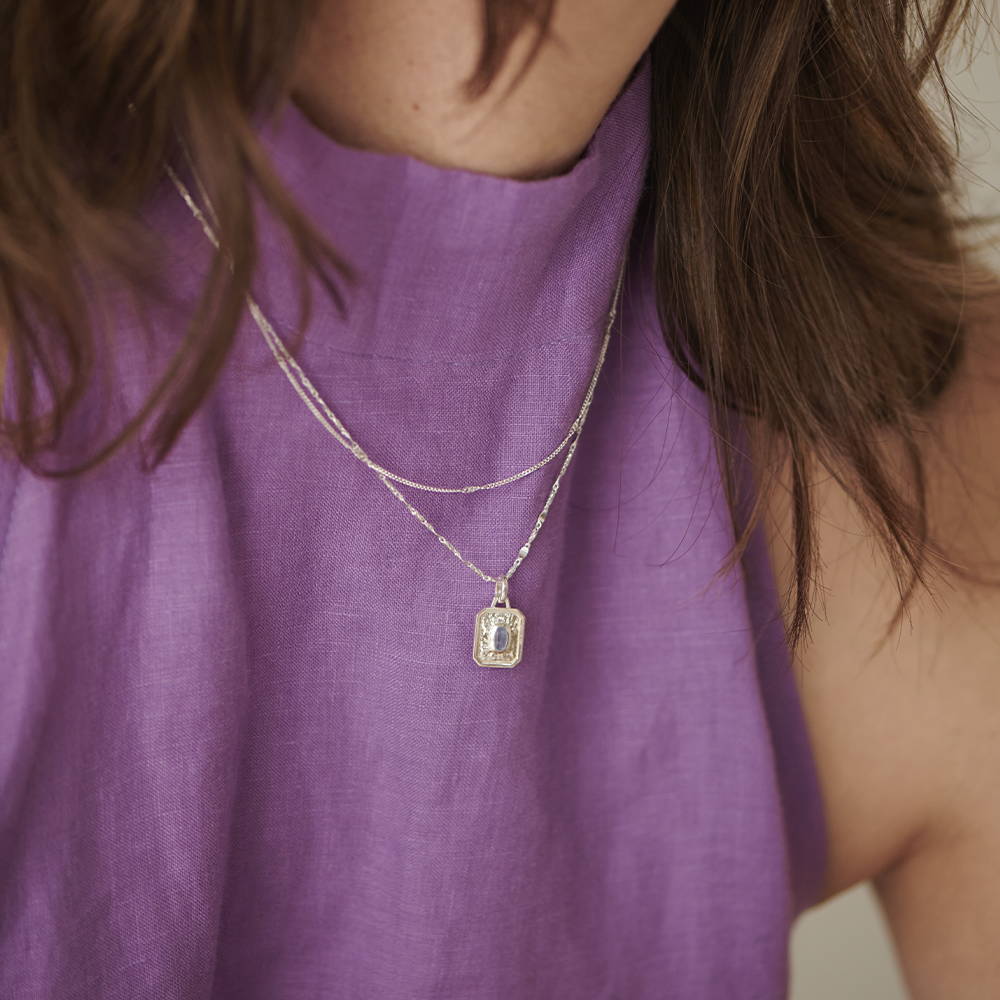 Read more
Behind The Meaning

The Meaning Behind Malachite

Read more
Behind The Meaning

The Meaning Behind The Healing